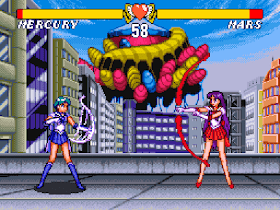 Genre: Action
Perspective: Side view
Visual: 2D scrolling
Art: Anime / Manga
Gameplay: Arcade, Fighting, Platform
Setting: Fantasy, Sci-fi / futuristic
Published by: Angel
Developed by: Make Software, Monolith Corp.
Released: 1996
Platform: Super Nintendo (SNES)
Another fighting game on the theme of Sailor Moon and her friends. Of course, it's amazing how you can do all those things in such short skirts that crazy girls do with each other in an effort, how to put it mildly, to fill the opponent's face. Having chosen a character (there are only a dozen of them, while in the Story Game mode there is a choice of 6 heroines), you go to fight - the game is a regular fighting game where fights are fought up to 2 victories. Game for 1-2 players with pretty average graphics (same as Bishoujo Senshi Sailor Moon S) and music.
‹
›
Home
View web version