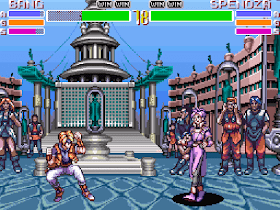 Genre: Action
Perspective: Side view
Visual: 2D scrolling
Art: Anime / Manga
Gameplay: Arcade, Fighting, RPG elements
Setting: Fantasy
Narrative: Martial arts
Published by: Right Stuff Corp.
Developed by: Right Stuff Corp.
Released: 1995
Platform: Super Nintendo (SNES)
Another anime fighting game. This representative is also impossible to write down to the bad. A very worthy implementation. An excellent choice of characters, each of them with their own attacks, unique combos and special moves. The game also provides for the most powerful attacks that do not leave just a living place on an opponent who has fallen under such a hot bunch. Also during the battle, you can counterattack, intercept the blows and attacks of opponents. In general, the combat system looks very good. Modes are also of interest. In one of them, you can select a specific character, go through the game with him and see his ending. Another mode perfectly provides an adventure element, where you and your chosen hero will have to visit certain places in the city, improve skills, place bets in battles, and of course, participate in all kinds of fights yourself and even enter a giant arena at certain times in order to show your skill to the public. The Japanese language does not really hinder progress in this game. Graphic and sound effects of a good level. Recommended to all connoisseurs of anime style and worthy representatives of the genre on 16 Bit.
‹
›
Home
View web version