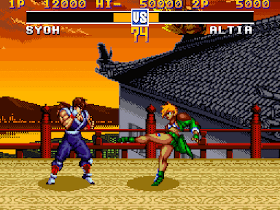 Genre: Action
Perspective: Side view
Visual: 2D scrolling
Gameplay: Fighting
Interface: Direct control
Published by: Toshiba-EMI Ltd.
Developed by: System Vision
Released: 1993
Platform: Super Nintendo (SNES)
Anime fighting game. There is a cyberpunk theme here and there. The characters have a good set of tricks and special movements. They know how to finish off in the air, make all kinds of throws, quickly approach and move away from opponents. If you learn to combine techniques, you can build very effective combos. In general, the action, with due skill, looks very convincing, so you can’t ascribe a fighting game to the bad ones. It was possible to build a series of strikes, from which the opponents did not go out of bounds at all. On the SNES, of course, you can find representatives of this genre much more interesting, but someone might like this one.
‹
›
Home
View web version