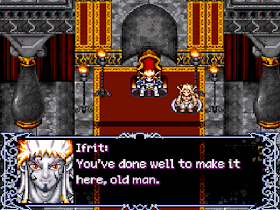 Genre: Role-playing (RPG)
Perspective: Diagonal-down
Art: Anime / Manga
Gameplay: Japanese-style RPG (JRPG)
Setting: Fantasy, Middle East
Published by: TAKARA Co.
Developed by: Pandora Box
Released: 1996
Platform: Super Nintendo (SNES)
Our hero - Ifrit was once the King of all Djinns. Powerful and omnipotent, he was capricious and quick-tempered. One fine day, a certain Suleiman managed to defeat Ifrit, and make him his servant. However, his happiness as a spellcaster did not last long: something that mastered the Ancient Magic attacked the house, and easily defeated even Suleiman.
Ifrit really wanted to take revenge on the one who actually stole the victory from him - but instead, Suleiman took away his strength and imprisoned him in a ring, obliging him to fulfill a thousand wishes before he was released!
And now, 999 wishes are fulfilled. However, the last went to Shukran, a girl who wished for peace to finally come to her country. Ifrit in his current state was unable to do this… from that moment their journey began, towards the return of power, with which, as you know, it is very easy to do good and cause peace!
The game uses, in addition to the classic turn-based gameplay, an interesting system called Barrier Cards. When you activate such a card, you get a special effect for three turns that applies to your characters or enemies. Their effects and gradations are very different, and the level also plays an important role - high cards hit weaker, so even weak enemies who have strong cards at their disposal can turn out to be serious opponents. This also forces them to deal with competent management - what to use now and what to save for the boss.
Another feature for a jRPG of the time is the magazine that Shukran owns. In fact, this is the same quest log or quest log that is the gold standard for Western RPGs. Thanks to him, you can be aware of what will happen to you next and find out what you should do.
The aesthetics of "One Thousand and One Nights" are beaten here quite well - which only adds to the game its own charm.
‹
›
Home
View web version