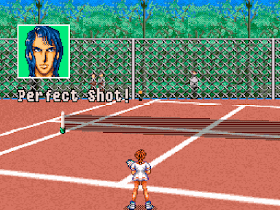 Genre: Sports
Perspective: Behind view
Sport: Tennis
Published by: Nippon Telenet
Developed by: Nippon Telenet
Released: 1993
Platform: Super Nintendo (SNES)
The game is implemented according to the classics of the anime Ace wo Nerae! This adaptation came out in the late 70s. Hiromi Oka and her best friend start playing tennis because of the "idol" of the whole school - Reika Ryuuzaki. Hiromi imitates her idol too much and completely forgets about the meaning of being in a tennis club. But everything quickly changes after the appearance of a new coach, Jin Munakata, who immediately falls in love with the girl and trains her day and night. After this event, everyone starts to hate Hiromi and intrigues her every day. The poor girl thinks she should stop playing tennis, but with the help of her always loyal friend, Hiromi realizes the main reason for playing tennis. The girl gets back on her feet and begins to train with all her strength and will to become the best tennis player in the world. In general, the plot tells us the story of a young tennis player and her efforts to become a star in this sport. What is most interesting after this film, tennis has become a surprisingly popular sport in Japan, especially among girls. The game is implemented very badly. The story is told very believably and has a decent narrative flow. The game was even translated into English by all sorts of amateurs. Apparently the developers put in a lot of effort to stay true to the source material, namely the various adaptations of the anime, and they managed to make a really decent game.
‹
›
Home
View web version