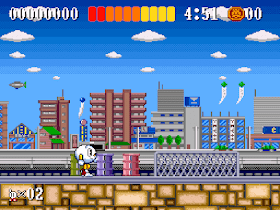 Genre: Action
Perspective: Side view
Visual: 2D scrolling
Gameplay: Platform
Published by: Coconuts Japan
Developed by: C-Lab
Released: 1993
Platform: Super Nintendo (SNES)
This game about a revived pachinko ball is somewhat reminiscent of Sonic. The stages are varied: there is an underwater world, climbing to the skies on platforms, even a labyrinth. The bonus round is designed for the pachinko game. Due to the crazy inertia, it can be difficult to avoid damage from enemies. At the levels, you can take prizes that give invulnerability, a shield, and health replenishment. Spikes kill instantly and it is often not clear where they are. Toward the end, we will have a second battle with the already defeated leaders. The graphics are pleasing to the eye. Pretty good game.
‹
›
Home
View web version