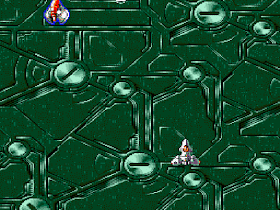 Genre: Action
Perspective: Top-down
Visual: 2D scrolling
Gameplay: Arcade, Shooter
Vehicular: Space flight
Setting: Sci-fi / futuristic
Published by: Teichiku Co.
Developed by: UPL Co.
Released: 1992
Platform: Super Nintendo (SNES)
A worthy representative of the genre of flying shooters. In the future, humanity is forced to evacuate from Earth to Mars. Abusing ecology for many years, the planet was soon ruined by our kind. Leaving a complex bio-computer to clean up the planet, people left it. However, humanity could not even imagine that the logic of a soulless machine would eventually lead it to the conclusion that for the well-being of the Globe it is better to eliminate the very source of the problem, that is, us. The logic, of course, is partly correct, but humanity is not satisfied with this alignment. Soon the colonies were severely attacked. And now you, as a perfect fighter pilot, need to fight off the first wave of attacks and get to the source of these unexpected attacks in order to save all of humanity from its own creation. All in all, a decent story. The game is also a positive experience. The whole combat process is accompanied by pleasant effects. With successful attacks on your ship, it loses control, predicting imminent destruction. Various weapons are available. Graphics and sound are of good quality. Recommended to all fans of this genre.
‹
›
Home
View web version