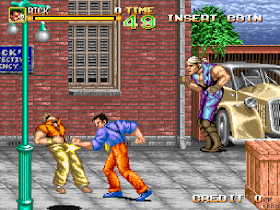 Genre: Action
Perspective: Side view
Visual: 2D scrolling
Gameplay: Beat 'em up / brawler
Interface: Direct control
Published by: Jaleco Ltd.
Developed by: C.P. Brain
Released: 1991
Platform: Arcade Machine
The good old beat 'em up is one of the most fun genres for playing together. In many ways, the game is similar to Final Fight, but has WHERE less fame.
The plot of this game is simple - as in Final Fight, the heroes start a marathon fight from the door of their place of work, which, in this case, is a detective agency. One rich man hired these "Holmes and Watson" to save his daughter, who was kidnapped by unknown people.
Actually, "Holmes" - Rick Anderson - has been working as a detective for 35 years. He is always calm, smart and reasonable. In terms of combat, he prefers Power Fighting (a style of fighting when a fighter uses his physical strength). "Watson" - Allen Tombs - a reformed criminal who was re-educated by Rick, 19 years old. He is Rick's protege, but, unlike his teacher, uses martial arts.
‹
›
Home
View web version