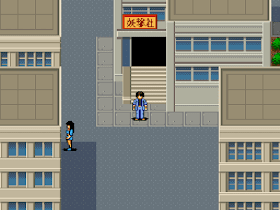 Genre: Role-playing (RPG)
Perspective: 1st-person, Top-down
Art: Anime / Manga
Pacing: Turn-based
Published by: Yutaka
Developed by: Nova Co.
Released: 1992
Platform: Super Nintendo (SNES)
Yakumo Fujii is an ordinary schoolboy, however, his father is too passionate about archeology and has not seen his son for a long time. Yakumo is not discouraged, he copes with everything perfectly, he studies in high school, and in the evenings he earns money in a bar. Suddenly, Pai bursts into his life - a timid girl from Tibet, who gives him her father's will - to help her find a magic figurine and become a person. It turns out that Pai is the last of the sanzhiyan, a powerful race endowed with amazing magical abilities and a third eye. The peaceful life of Yakumo has come to an end. Firstly, he wants to help Pai, and secondly, Pai has two personalities, a cute girl he likes, and an arrogant sanzhiyan. Thirdly, it so happened that the lives of Yakumo and the immortal sanzhiyan are now connected, and he can only become mortal again if the Sanjian becomes a man. So our search for the magic figurine and Pai's past begins. The game is based on the popular anime of the 90s. and is accompanied by interesting cutscenes. The fans, I think, will like it.
‹
›
Home
View web version