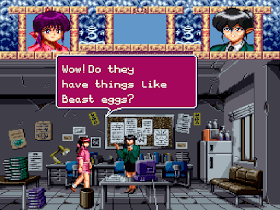 Genre: Action
Perspective: Side view
Visual: 2D scrolling
Art: Anime / Manga
Gameplay: Puzzle elements
Published by: Banpresto Co.
Developed by: Now Production Co, System Supply N‑Tech
Released: 1995
Platform: Super Nintendo (SNES)
Continuation of the adventures of Pai, who has mystical abilities, and the boy Yakumo, who, by means of these abilities, was turned into some kind of immortal being without a soul, which, however, saved his life. This time, Banpresto decided to make a game based on the popular anime of the 90s in the quest genre, and of very excellent quality. The graphics here are just great. All kinds of locations and plans look worked out to the smallest detail. Heroes interact with multiple objects and move towards their adventures in order to realize their life goals. Recommended to fans of this work. Banpresto did a great job, apart from the fact that the game is in Japanese, there is practically nothing more to complain about.
‹
›
Home
View web version