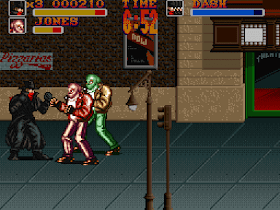 Genre: Action
Perspective: Side view
Visual: 2D scrolling
Gameplay: Beat'em up / Brawler
Published by: Ocean Software Ltd.
Developed by: Ocean Software Ltd.
Released: 1994
Platform: Super Nintendo (SNES)
I don’t know how many have already noticed that there are a lot of high-quality Beat'em up about superheroes on SNES and all from different game manufacturers. This time, Ocean decided to show off, which did not particularly please gamers with games of this genre, but specialized mainly in the production of high-quality shooters, take at least, for example, their Robocop 3 on Nes or Jurassic Park 2 and Super Turrican 2 on this console. As their experiment, they took a well-known hero named Shadow, whom we, in principle, also already know from the film of the same name. They also turned out quite well, or rather, everything, as in other superhero bitems on this console. Shadow, as in the movie, must stop the followers of Genghis Khan, intending to plunge the world into chaos. To do this, the Shadow uses his fists and legs, uses super blows and uses his mystical abilities, everything is as usual. And when the time comes, he pulls out his cool trunks from behind his bosom, which can be called the only innovation in numerous Beat-Em-Ups about superheroes on the Snes. Of course, maybe we wanted more, but the fact that these games do not go out just because of their popular name is already a big plus. In general, all fans of superheroes and just high-quality combat adventures are also recommended to familiarize themselves with this game.
‹
›
Home
View web version