The Legend of the Mystical Ninja (SNES) 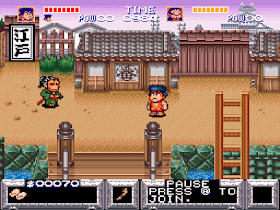 Genre: Action
Perspective: Side view
Visual: 2D scrolling
Art: Anime / Manga
Pacing: Turn-based
Gameplay: Platform
Published by: Konami
Developed by: Konami Industry Co.
Released: 1992
Platform: Super Nintendo (SNES)
Konami has truly made a gem in the Super Nintendo library. It's a sin for any SNES owner not to complete this game. The Legend of The Mystical Ninja begins in a peaceful village. The story is presented so magnificently that it is better not to go into details so as not to spoil the impression. This adventure will take us all over medieval Japan. The game belongs to the excellent Ganbare Goemon series and this is the first game that Konami has brought to the western shores, thus gaining a loyal following of the franchise. In Japan, this series was a huge success and a large number of products with the name Ganbare Goemon were born. The gameplay is just great, it will be especially fun to play with a second player. The graphics are made in anime style, which is in good agreement with the Japanese theme of the game. All kinds of backgrounds are very diverse and, in general, everything looks great. The sound in the game is also good. The Super Nintendo is equipped with impressive simulations of taiko drums, Japanese flutes and stringed instruments. The game successfully uses both traditional Japanese music styles and new, more modern ones to create a unique sound that is one of the game's defining features. The sound enhances the mood of various scenes excellently: The controls are very comfortable and responsive. The game deserves the highest ratings and Legend of The Mystical Ninja deserves this rating.
‹
›
Home
View web version