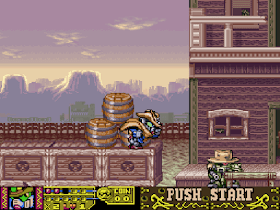 Genre: Action
Perspective: Side view
Visual: 2D scrolling
Gameplay: Arcade, Platform, Shooter
Setting: Sci-Fi / Futuristic
Published by: Banpresto
Developed by: Sun L
Released: 1995
Platform: Super Nintendo (SNES)
It takes place in the future, where your heroes will have to eliminate the next batch of enemies. Choose a partner and start this noble mission. Naturally, the main task is to shoot various opponents that appear on the screen, as well as the usual concern for the integrity of your own character in such games. The characters and events of the series are a combination of Gundam, Kamen Black Rider and Ultraman.
‹
›
Home
View web version