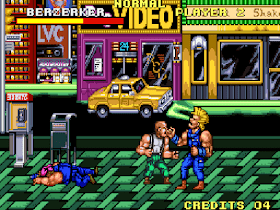 Genre: Action
Perspective: Side view
Visual: 2D scrolling
Gameplay: Arcade, Beat 'em up / brawler
Setting: Sci-fi / futuristic
Published by: American Technos Inc.
Developed by: Technos Japan Corp.
Released: 1993
Platform: Super Nintendo (SNES)
Combatribes - another Beat 'em up from Technos, migrated to the Super Nintendo from arcade machines, may have lost something, but retained its features in many respects. Your heroes are three muscular punks whose street fights do not fit the rule "they don't beat the lying". This is probably the only beat where you have to brutally finish off enemies: jump on their backs, sit on horseback and beat your muzzle on the asphalt, throw, pick up and throw again. Although Beat 'em up is inferior in some aspects to its counterparts on this console, namely Double Dragon and Nekketsu from the same company, it may not be popular heroes who have not won such a legend as the above games in the past, but it turned out to be quite a high-quality Beat -em-up. I think fans of Technos games and high-quality combat adventures will appreciate this creation.
‹
›
Home
View web version