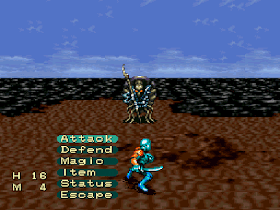 Genre: Role-playing (RPG)
Perspective: Diagonal-down
Visual: 2D scrolling
Art: Anime / Manga
Setting: Fantasy
Published by: Enix America Corporation
Developed by: Produce Co.
Released: 1993
Platform: Super Nintendo (SNES)
The plot revolves around the mystical runes of power. You must go on a sacred quest to get them. To begin with, you are invited to choose from 7 adventurers, each with their own motives to take possession of the runes. Naturally, the person who eventually collects them all will become the lord and ruler of the world. However, the game presents unexpected twists in the plot and the history of the characters. So let's go around the world of this beautiful RPG and plunge into a wonderful journey. The graphics here, of course, are not particularly outstanding. But on the other hand, the special effects are amazing in their implementation. There are no complaints about the music. The game is very difficult. Hardcore players will be beside themselves with happiness, but I recommend others to be patient. Inexperienced players will die again and again until they abandon her passage. Only those who are willing to accept the challenge will be able to continue playing it. The game certainly deserves such players. This is a good and worthy project. It perfectly complements the library of this system and stands out for its originality and ambiguity among games of this genre on the Super Nintendo.
‹
›
Home
View web version