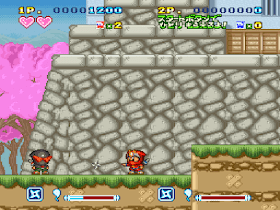 Genre: Action
Perspective: Side view
Gameplay: Platform
Setting: Fantasy
Published by: Jaleco Ltd.
Developed by: Jaleco Ltd.
Released: 1994
Platform: Super Nintendo (SNES)
A cute ninja platformer that takes their souls after defeating enemies. Of course, only for good intentions. Our task is to save the princess. Initially, there are 2 weapons (shurikens and bombs) and 1 magic (double summoning), after defeating bosses, the hero receives new weapons and magic. There is a run. Toward the end there will be a nice level in the genre of flying-shooter. Beautifully designed, 1-2 players.
‹
›
Home
View web version