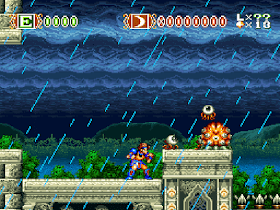 Genre: Action
Perspective: Side view
Gameplay: Platform
Published by: Sony Imagesoft
Developed by: Ukiyotei Company
Released: 1993
Platform: Super Nintendo (SNES)
A Super Nintendo masterpiece. At the beginning of the release of this game, there was an ambiguous opinion about it, but the numerous positive and respectable reviews of people playing it put everything in its place. The game is made in fantasy style. You play as a handsome young teenage guy. He is a good fighter with sharp fighting skills and zeal in his soul. His father was killed in the fight against the dark troops. And our young Sky decided to follow in the footsteps of his parent as a hero and fight the dark forces as much as his strength and capabilities allow him. Therefore, on the battle path, you need to increase your performance so as not to be a misunderstanding against the backdrop of cool opponents. Our young wizard moves around the map, where he will visit all sorts of fabulous, but dangerous objects, learning magical skills and more powerful spells that will stir up the entire dark side of Evil. In parallel, the Lord of War Ashura sets out to summon monsters from hell. And he gathers merciless troops around him to conquer the world. Whether the acquired skills will be enough for our hero in order to stop such an unforeseen event, we have to find out. The implementation of the entire game is done at a very decent level. The character moves through the levels very freely and easily, knows how to climb walls, uses his arms and legs on enemies, and after bosses he learns various spells. Bonus levels with a view from the back of our hero, where he soars on makeshift wings, are very chic. In general, the game also makes excellent use of the available effects of Snes and its Mode 7 in other cases. It is very interesting and exciting to play. A beautifully crafted single player game.
‹
›
Home
View web version