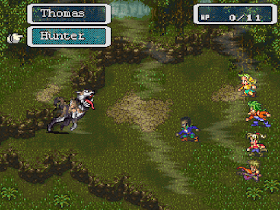 Genre: Role-playing (RPG)
Perspective: Top-down
Pacing: Turn-based
Setting: Fantasy
Published by: Square Co.
Developed by: Square Co.
Released: 1995
Platform: Super Nintendo (SNES)
The gameplay is traditional for most Japanese RPGs of the time, although it features a number of radical innovations. In particular, the characters do not have levels - their personal characteristics change after each battle, depending on the participation of the hero in a particular battle. In addition to the usual HP scale, the characters also have LP hit points, in the event of a complete loss of which the character leaves the squad and can later be hired again. This does not apply to the main character, in case of his death, the game immediately ends with a loss. There is a system for improving weapons, as well as a system for studying and developing spells. In addition to the usual battles between characters, the player is also given the opportunity to participate in battles between armies, managing large detachments of soldiers during various military campaigns.
The fictional world presented in Romancing Saga 3 is built on the so-called "deadly eclipse", a cataclysm that occurs once every 300 years and kills all living creatures: men, women, children, animals, plants, and even ferocious monsters prowling around. Each time, only one single child, chosen by the dictates of fate, survives. 600 years ago, such a child became an evil lord of darkness, during the next eclipse, the chosen one became a holy king and defeated the demon. Another catastrophe is approaching and no one knows who the survivor will become, a villain or a benefactor. The plot describes the adventures of eight characters - the scenario is the same for everyone, and in the course of the story they are sure to gather in one team. Princess Monika accidentally learns about the revolutionary plans of a traitor baron who intends to overthrow her brother, Marquis Mikhail, from the throne. She sets out to warn her brother as soon as possible, but loses her horse and is forced to stay in a small town inn. There, the princess is joined by other characters who have agreed to help her reach her goal, but upon arrival, the protagonists learn that the civil war has already begun.
‹
›
Home
View web version