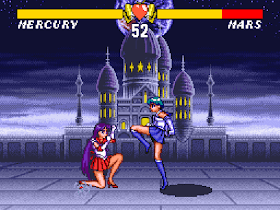 Genre: Action
Gameplay: Arcade, Fighting, Platform
Setting: Fantasy, Sci-fi / futuristic
Published by: Angel
Developed by: Arc System Works Co.
Released: 1994
Platform: Super Nintendo (SNES)
A fighting game with the same long-legged girls from the series about Sailor Moon. They fight with extraordinary cruelty and even sophistication, as if against them are not the same girls, but some evil monsters. The fights themselves look standard for such games. There are six characters for the Story Game, and if you choose the 2-player mode, then there are nine of them. In general, for a fighting game, the game is quite in the tradition of the genre.
‹
›
Home
View web version