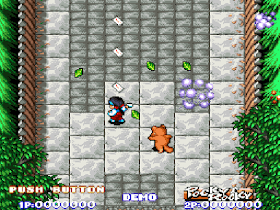 Genre: Action
Visual: Isometric
Gameplay: Shooter
Published by: Natsume
Developed by: Natsume Co.
Released: 1993
Platform: Super Nintendo (SNES)
Walker with good graphics and interesting to pass. Choose a hero and hit the road. Your character is armed with a club and magic cards, which are used to throw at enemies. Bosses in the endings of the stages, of course, are expected. Game for 1-2 players.
‹
›
Home
View web version