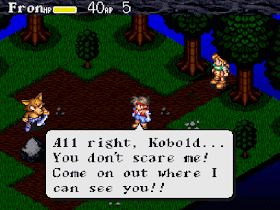 Genre: Role-playing (RPG)
Visual: Isometric
Art: Anime / Manga
Pacing: Turn-based
Gameplay: Puzzle elements
Setting: Fantasy
Published by: Pack-In-Video Co.
Developed by: Amccus, Bits Laboratory
Released: 1996
Platform: Super Nintendo (SNES)
The game takes place on the island of Monstania, once inhabited by fairies. 50 years have passed, not a single fairy is left on the island anymore. The main characters of the game - a guy named Fron and his childhood friend Tia go on a journey in search of a legend. A diligent search leads the friends to a cave where they find a mysterious orb. Taking the sphere with them, the guys go home. That same evening, in the pouring rain, a little girl runs into their house and asks to be protected from the chase. From here begins your great adventure full of secrets of the island of Monstania.
Gameplay: The game is a genre of tactical role-playing game where battles with enemies take place strictly on certain maps. But the concept of battles in terms of gameplay is more reminiscent of games like Pokemon Mystery Dungeon, Shiren the Wanderer, Chocobo Dungeon, or Torneko games from the Dragon Quest series.
‹
›
Home
View web version