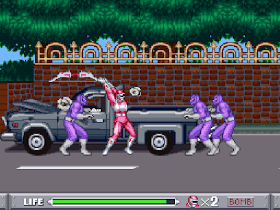 Genre: Action
Perspective: Side view
Visual: 2D scrolling
Gameplay: Beat 'em up / brawler
Published by: Bandai America
Developed by: Natsume Co.
Released: 1994
Platform: Super Nintendo (SNES)
An action game from Natsume based on the children's fantasy tv series produced by Saban since 1993. Natsume has a great experience in creating excellent action games since the NES platform, on SNES, this company has distinguished itself with such masterpieces as Ninja Warriors, Wild Guns, Pocky & Rocky, Shin Kidou Senki Gundam W - Endless Duel, etc. Here, the implementation is a little more modest, which immediately felt in the character design. However, the beat 'em up is still very solid. As in the above games, such a brilliant composer as Hiroyuki Iwatsuki is involved in the sound accompaniment here, which means it is done without any negative points. The graphics are also quite good and fit into everything that happens. The combat action is very energetic, you can choose one of the five characters who are called upon to fight the universal evil, and run ahead headlong, eliminating enemies of varying degrees of difficulty. When the boss appears, we morph into the Mighty Ranger and use the weapons available to each hero, on the enemies we use various throws and the ability to grab the enemy and thoroughly beat him in the mighty belly, knocking out all the breakfasts. There are also special energy bursts that destroy all enemies in sight. In the end, they will let the giant Zords take part in the battle. Light enough, but a good game for one player.
‹
›
Home
View web version