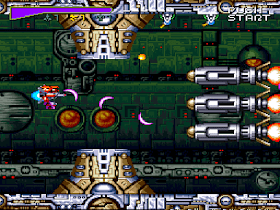 Genre: Action
Perspective: Side view
Art: Anime / Manga
Gameplay: Shooter
Vehicular: Mecha / giant robot
Setting: Sci-fi / futuristic
Published by: Zamuse
Developed by: Winky Soft Co.
Released: 1993
Platform: Super Nintendo (SNES)
A game based on the anime franchise "Super Dimension Fortress Macross" or simply "Macross", which is a flying shooter where you have to kill all the enemies and reach the end. Your spaceship can transform into three forms: a resemblance to an airplane, a plane with cannons, and a robot that can turn in the opposite direction, but is slower than the previous two forms.
‹
›
Home
View web version