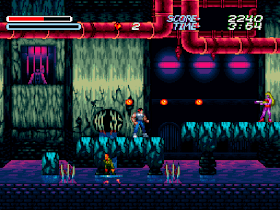 Genre: Action
Perspective: Side view
Visual: 2D scrolling
Art: Anime / Manga
Gameplay: Arcade, Platform, Shooter
Narrative: Horror
Published by: KSS
Developed by: Eleven Co.
Released: 1995
Platform: Super Nintendo (SNES)
The game has already written itself into the masterpieces of Japanese classics on the Super Nintendo. A demonic action of a very good level, incorporating the features of such cult series as Castlevania and Ghost'n Goblins, also presented on this system. Your character Axel Abel must fall into the underworld itself in order to prevent the most terrible phenomenon of hell. The hero's family was kidnapped for sacrifice and the revival of the almighty king of hell. Axel sacrifices himself for a second, falling into the world of terrible and dangerous creatures. At the first meeting with them, he has no choice but to empty entire clips, releasing cartridges into the first offspring that comes across. Only the help of his deceased wife and good forces help him adapt to this world. And Abel has no choice but to meet more and more bloodthirsty creatures with every step taken. The most important feature of the game is the metamorphosis of our hero. After each destroyed boss, a talisman remains, allowing you to get the powers of three infernal creatures. But these transformations not only help the hero in his deadly mission, but can also play a cruel joke on him and lead to an unexpected ending. There are 2 endings in the game, each of them presents its own tragic ending. An excellent, moderately bloodthirsty game with minuses and pluses for 1 player, nevertheless, it is recommended first of all to all fans of demonic games.
‹
›
Home
View web version