FEDA: The Emblem of Justice (SNES) 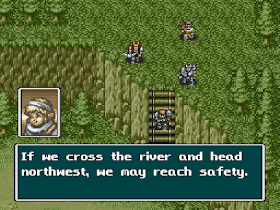 Genre: Role-playing (RPG), Strategy
Perspective: Diagonal-down
Pacing: Turn-based
Setting: Fantasy
Published by: Yanoman Corporation
Developed by: Max Entertainment
Released: 1994
Platform: Super Nintendo (SNES)
Similar to Shining Force, Feda has two gameplay components: the first part involves the exploration (visiting cities, shops and houses), and the second is the actual battles on the world map. Battles begin when the player and the enemy army converge in the same area or at the behest prescribed by the plot. Excluding many similarities to Shining Force, this game has one significant difference - the choice to fight for order or for chaos. This choice depends on how the player ends the battle, whether he will kill everyone indiscriminately (which will lead him to chaos) or try to find an alternative, peaceful way to win (giving him a point in favor of order).
In addition to neutral characters, which will always be in the party, the hero can get both heroes of order and chaos on his side. Also, nothing prevents both sides from leaving immediately, as soon as you lean to the side of the other.
The game is named after one of the ranked emblems used here, or rather the highest of them "Fedayenn Goddess of Justice".
‹
›
Home
View web version