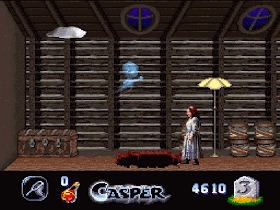 Genre: Action
Perspective: Side view
Setting: Fantasy
Published by: Natsume
Developed by: Absolute Entertainment
Released: 1996
Platforms: Super Nintendo (SNES), 3DO Interactive Multiplayer, PlayStation (PSX, PS1)
A famous ghost decided to take up residence in this game on the Super Nintendo. The game is most likely based on a movie. The main character is a small friendly ghost created by the skill of animators named Casper, who does not want to be like his hooligan brothers. His friendship with teenage girl Kat helps her and her father, Dr. Harvey, deal with the dangers that await them in a haunted house. The action is done in a leisurely manner, but the possibilities are still amazing. Casper is able to turn into all sorts of objects that help him guide his new friend through the old house, in which all sorts of saucers fly and other unimaginable things happen. Recommended to all fans of this character and the movie of the same name.
‹
›
Home
View web version