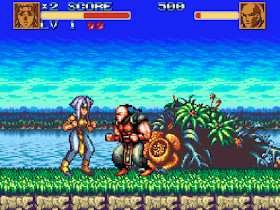 Genre: Action
Perspective: Side view
Visual: 2D scrolling
Art: Anime / Manga
Gameplay: Beat 'em up / brawler, Platform
Setting: Fantasy
Published by: Asmik Corporation
Developed by: Arsys Software
Released: 1994
Platform: Super Nintendo (SNES)
Battle Zeque Den is a beat 'em up with anime characters, namely three young ladies. At first, it may not seem very pleasant. However, the characters have hidden techniques, throws in the air and other powerful blows, which allows, not to say excellent, but good fun. It is possible to upgrade the character. The levels also become more varied and colorful, where battles will take place against the backdrop of sunset, ancient architecture and other exotic planes. The level of the desert, shrouded in yellow sands, looks very chic, they will also let you live in a cave inhabited by all sorts of homosapians. The bosses are not that difficult, the main thing is not to give them a head start. A good above-average level beat 'em up with nice graphics and music.
‹
›
Home
View web version