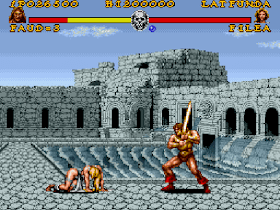 Genre: Action
Perspective: Side view
Gameplay: Fighting
Setting: Fantasy
Published by: Sammy USA Corporation
Developed by: Aicom Corporation, Electronics Application Co.
Released: 1993
Platform: Super Nintendo (SNES)
A good fighting game on the theme of medieval wars. In the lands of Virg, there is a custom to choose a champion at the Royal Tournament. In an effort to take over the human world and this kingdom, a zealous demon from the underworld sends five phantoms to take possession of each of the warriors. The last survivor of the possessed heroes will be able to kill the king. However, one of the challengers, Durill, manages to defeat the ghost that tried to take control of him, but this rivalry exhausted Durill and he died. His son Kerrel enters the tournament instead of his father to avenge him and kill the demon. The game has two modes: in "Hero" - the player can only play as Kerrel and follow a certain story, which was started above. In the "Battle" mode, you can choose any hero where a fight is possible, both against the computer and for the 2nd player. All characters are representatives of barbarians, knights, bloodthirsty creatures, brave and sexy Amazons, etc. - come together in a fierce confrontation for the title of the strongest warrior. So that the news of glorious victories spread throughout the kingdom and reached the ears of the king himself. All that is required of you is to mercilessly shred, brutally beat and bravely defeat your enemies without fear and without a drop of doubt in your heart. Fights take place, as already established in many fighting games, up to two victories. The graphics in the game do not cause any complaints, all locations perfectly convey the given theme. Characters wield weapons and are not devoid of individual special moves, and the game may well lure you in for a while.
‹
›
Home
View web version