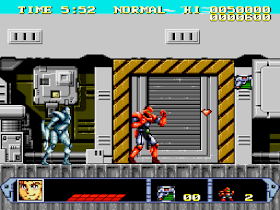 Genre: Action
Perspective: Side view
Art: Anime / Manga
Vehicular: Mecha / giant robot
Setting: Sci-fi / futuristic
Published by: Atlus Co.
Developed by: Atlus Co.
Released: 1992
Platform: Super Nintendo (SNES)
Action in anime style. We are given a choice of three heroes. Each has its own special means of destroying enemies. The red Jack has a gun, the silver one has a sword. Blue doesn't have any. Each hero fights differently - one with his hands, the other with knives. Having chosen one hero, we go through the level and destroy the enemies that come from everywhere. After we get to the boss, a cartoon cutscene will begin. Our hero will turn into a robot and begin to drive justice into the carcass of the boss. The gameplay is average. The game lacks a bit of dynamism, and the enemies just stupidly climb forward. The graphics are good, the sound is not annoying.
‹
›
Home
View web version