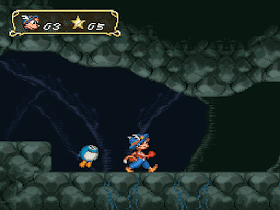 Genre: Action
Perspective: Side view
Visual: 2D scrolling
Gameplay: Arcade, Platform
Published by: Titus Software Corporation
Developed by: ASCII Corporation
Released: 1994
Platform: Super Nintendo (SNES)
The protagonist of this game, Ardy, is a big adventurer and whenever he gets a chance, he goes in search of treasures, but what treasures without bad guys, and along the way he has to fight with them. This time, he needs to restore all seven parts of the mysterious ancient power and defeat evil, in the form of a spherical being Visconti. He is accompanied by his friend Pic, a cute little creature who is not averse to attacking anyone who gets in Ardy's way and swallowing them. Before us is a very good representative of the platformer genre with very nice effects and standard features. A very good contribution to the collection of similar games.
‹
›
Home
View web version