The Adventures of Dr. Franken (SNES) 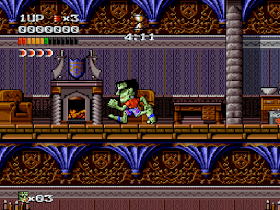 Genre: Action
Perspective: Side view
Visual: 2D scrolling
Gameplay: Platform
Setting: Sci-fi / futuristic
Narrative: Horror
Published by: DTMC
Developed by: Motivetime Ltd.
Released: 1993
Platform: Super Nintendo (SNES)
A game about the monster of Dr. Frankenstein. However, the monster here is not so scary and terrible, but quite a cute and stylish guy. Yes, and he moves very perky. In general, if you expect to see horrors with this character from the game, you will certainly be disappointed. It is a platformer of not particularly outstanding level. All the standard traditions of the genre are present here, however. Franky runs around the locations and, judging by the way he wields his legs, he clearly studied martial arts skills. Franky also knows how to launch all sorts of energy balls, either paralyzing the enemy or taking them out. The game doesn't seem to tell the story. According to various sources, it is as follows. Our hero is about to travel with his girlfriend Bitsy, but there is a problem, Frankie can only afford one plane ticket. So he dismembers his girlfriend and stuffs them into several suitcases, which erroneously fly around the world in different directions. Now Frankie is going to save, or rather, to collect his girlfriend again in all the nooks and crannies in order to reunite with his love. Probably, only for this reason, you can go through the game to see what Frank's tricks are, and what his girlfriend is.
‹
›
Home
View web version