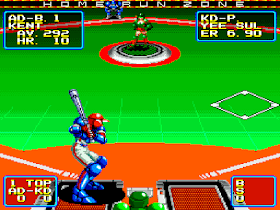 Genre: Sports
Perspective: Behind view, Diagonal-down
Visual: 2D scrolling
Sport: Baseball
Setting: Sci-fi / futuristic
Published by: Tradewest
Developed by: Pallas
Released: 1993
Platform: Super Nintendo (SNES)
Baseball simulator. But not ordinary. The game is ported from the Neo Geo arcade machine. So the quality of the game can not even argue. The game is wonderful. There are 12 different teams to choose from (6 for each of the game modes). In this game, robots and cyborgs take over the bat and the ball. The player is given to hit the ball, throw the ball and catch it. The action takes place in two modes. In one, when a player serves or hits the ball, the player sees the batter and the server. In another mode, the player already sees the entire field and already controls all the players in order to prevent the enemy from gaining a foothold on the "base". In general, we have a good futuristic baseball simulator with excellent graphics and sound.
‹
›
Home
View web version