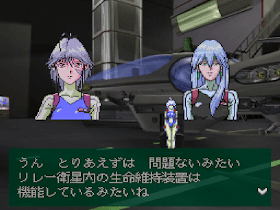 Genre: Action, Adventure
Perspective: 3rd-person
Art: Anime / Manga
Setting: Sci-fi / futuristic
Published by: Hudson Soft Company
Developed by: Hudson Soft Company
Released: 1994
Platform: NEC PC-FX
The game takes place in the future. The police catches the eye of a scientist named Cronus, who conducts genetic experiments on humans. The police chief rescues three little girls, each of whom has been subjected to these experiments.
15 years have passed. Three young girls Saki, Lilis and Ariel now work for the Galactic Police and want to find out the truth about their origins and experiments. They are sent on three dangerous missions that they may not survive.
Team Innocent: The Point of No Return is an adventure game with action elements. There are 3 missions in total in the game. Most of the time you have to play for Saki only occasionally switching to other heroines. Your task is to explore a large location, collect items and solve puzzles. You can find various weapons (from axes to pistols) that can be equipped. There are also 4 options for action: punches, kicks, shooting and, in certain cases, jumping. Stylistically, the game resembles the Alone in the Dark series, the only difference is that the characters are not digitized, but sprites. There are also several videos in anime style and voice acting for dialogues.
‹
›
Home
View web version