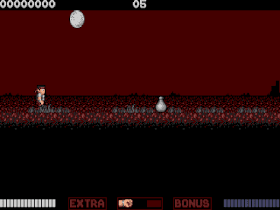 Genre: Action
Perspective: Side view
Gameplay: Arcade, Platform
Published by: Gremlin Graphics Software Limited
Developed by: Core Design Ltd.
Released: 1989
Platforms: Amiga, SEGA Genesis / Mega Drive, Amstrad CPC
Switchblade is a platform game from Simon Phipps, one of the creators of the Rick Dangerous series, that he made in his spare time for 18 months, originally on the Atari ST (it was his first game for this platform). And it turned out very cool! How do you like an analogue of Rick, but in the form of a commando with a bandage on his head in dark dungeons against mutant robots? Here I am about the same.
The plot is quite simple - a hero named Hiro (it could have been called something more original) must take revenge on the cyborgs for the death of his people, the Bladeknights, by collecting 16 fragments of the legendary Fireblade. The game engine is very similar to Rick's, but here, in addition to a huge branched map and enemies that appear on triggers, its own feature is actively used - opening elements of the map, that is, sometimes you need to break a wall or just go to a certain place, and only then a passage is displayed further . Some passages lead to a dead end, others - open the way further. But we must not forget that it is necessary to collect all 16 fragments of the sword!
Hiro usually fights hand-to-hand, but he can also find additional weapons, such as shurikens or daggers. Enemies do not behave too aggressively, they go straight to you and allow themselves to be beaten; can hit back only occasionally and if the hit button is not pressed in time. The danger is represented by all sorts of traps and falls from a height.
In addition to addictive gameplay and excellent graphics for its time, Switchblade also has amazing music, both in the intro and in the game itself. It was written by a wonderful Commodore 64 musician - Ben Daglish. An unequivocal classic of the platform genre, a must-see!
‹
›
Home
View web version