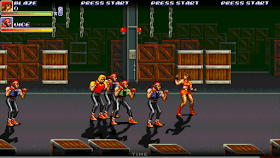 Genre: Action
Perspective: Side view
Visual: 2D scrolling
Art: Anime / Manga
Gameplay: Beat 'em up / brawler
Interface: Direct control
Published by: Kratus
Developed by: Kratus
Released: 2016
Platform: OpenBOR
Streets of Rage 2X is a remake of the famous beat 'em up series. The remaster is based on improved artificial intelligence, high resolution and frame rate, new skills, the ability to block, air combos and much more. Of the innovations, the developers note the cooperative mode for up to 4 people.
After completing the story campaign of Streets of Rage 2X, you will have access to new characters and a number of other improvements that make the classic game deeper and more interesting. At launch, the main characters of the original game are available to you: Adam Hunter, Axel Stone and Blaze Fielding. However, after beating, you will be able to play for ordinary adversaries and all the defeated bosses from the first three games in the franchise.
In the second part, the wrestler Max Thunder debuted - the most powerful hero of all the available main characters. The campaign consists of 8 levels: City Streets, Bridge, Amusement Park, Stadium, etc. The main villain is Mr. X, who met in the previous game. Combat mechanics is based on a complex combat system: several types of attacks, dodge, block and capture are available. Characters can perform special enhanced attacks.
Enemies have a health indicator. Among the opponents are bikers, ninjas, kickboxers and robots. You can pick up any weapon available on the level or dropped by enemies. This can be a variety of melee weapons, including a throwing kunai. The baseball bat has been replaced with a deadly katana.
‹
›
Home
View web version