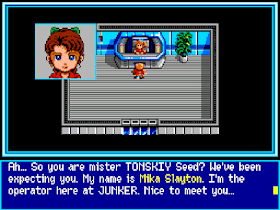 Before the fight with the last boss, do not ignore the hint about the antidote and take the trouble to get it by returning to the laboratory located a few screens earlier. Otherwise (regardless of the level of pumping!) You will die immediately after the first spray of the virus, which the boss will surely arrange for you sooner or later.
‹
›
Home
View web version