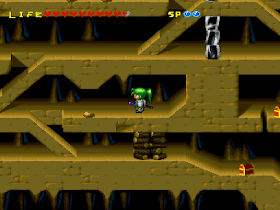 Genre: Action
Art: Anime / Manga
Gameplay: Platform, Puzzle elements
Setting: Fantasy
Published by: NEC Home Electronics
Developed by: NEC Interchannel
Released: 1998
Platform: NEC PC-FX
One day, a young swordsman named Axid approached the lake and saw a tiny girl in a bubble. In an attempt to save her, he falls into the water and ends up in a cave. In it, Axid rescues the magician Reinas, imprisoned in a crystal, and together they try to figure out how to help other creatures in trouble.
Rururi Ra Rura is a puzzle platform game. The player will have to find the right path through a huge maze-like world, using different characters to overcome obstacles. For example, Axid can use his sword to cut wood or ropes, Reinas uses fire magic to melt ice, etc. As the game progresses, more and more characters will join, each with unique abilities needed to complete, including a frog that will help you jump further and a liquid character that can squeeze through cracks. Each location has at least one camp where the player can change characters.
Large locations have multiple exits, and it is often necessary to return to a location with other characters to unlock new areas or move to a new location. The game has various enemies that can be defeated using physical attacks or magic. Boss fights take place on separate screens. There are many items scattered around to increase the character's stats and heal.
‹
›
Home
View web version