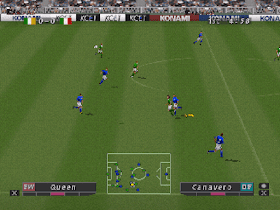 Genre: Sports
Perspective: Diagonal-down
Visual: 2D scrolling
Gameplay: Managerial / business simulation
Interface: Direct control
Sport: Football (European) / Soccer
Published by: Konami of Europe GmbH
Developed by: Konami Computer Entertainment Tokyo
Released: 2002
Platform: PlayStation (PSX, PS1)
Don't let the name of the game fool you. Pro Evolution Soccer belongs to the International Superstar Soccer family. In this case, the first part of the name was simply cut off. This product is a major update to ISS Pro Evolution 2. Fans will love it.
In Japan, PES was released under the name Winning Eleven 5 Final Edition, that is, as a revised and expanded edition of WE5. It was this version of the game that went to the West, where it quite successfully made its way into the charts, primarily in the British. In general, Konami, with its approach to the release of football simulators, has already managed to bypass even EA Sports. Not only are the products in demand, but most importantly, games like PES are a real asset for all fans of the ISS series. Football from EA Sports is simpler and more dynamic, despite the high speeds that prevail in the latest simulators from Konami. A PES is designed specifically for a thoughtful (sometimes even too much) approach.
The players have increased characteristics, and in order to make some kind of decision, now you need to monitor even more which of your wards has the ball. Nuances - darkness. It comes to the point that you need to know the strengths and weaknesses of each of our players. Of course, only fans get to such horror, but it is for the gameplay of this level that ISS is loved. A little closer to the people are the gameplay elements lying on the surface. In this case, work with the ball has undergone some improvement. The difference compared to the ISS Pro Evolution 2 is noticeable. Mastering new tricks (or otherwise functioning old ones) is not the easiest task, but if successful, the pleasure of the game will only increase.
Another notable innovation is the improvement of formations and some progress in relation to the Master League mode. There are now points that you need to allocate to the maintenance of the player. Every season your players will have to pay salaries. The number of settings in the player editor has also increased.
The selection of teams compared to the same series from EA Sports is simply ridiculous. They are nothing at all, and here there are also some clubs on the list that can only be attributed to the leaders of world football due to a big misunderstanding.
In general, Pro Evolution Soccer is a powerful game for its genre, which pleases PS1 owners with its appearance.
‹
›
Home
View web version