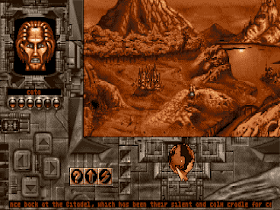 Genre: Role-playing (RPG)
Perspective: 1st-person
Setting: Cyberpunk / dark sci-fi
Published by: Psygnosis Limited
Developed by: Morbid Visions
Released: 1993
Platform: Amiga
Perihelion: The Prophecy - an undeservedly forgotten role-playing game for Commodore Amiga computers, developed by the Hungarian company Morbid Visions and published by the famous Psygnosis - greets the player with these words. And not just meets with text, but with a real voice, which is more suitable for a death or doom metal album. Six heroes created to fight a terrible evil that has no name that strikes people with madness, fear, despair, forcing them to turn into gangs of marauders and priests of dark cults, are waiting in the Citadel. And that time has come!
A stylish atmospheric cutscene is followed by the process of generating characters. Everyone needs to choose a class and subclasses that affect the characteristics and starting inventory, as well as psionic abilities (not everyone has). There are not too many classes, but they are unusual; in addition to people, there are some bionecrons, siberns, symbions and three types of chimeras - insectoid, reptilian and feline. For each character, you can choose a portrait - that's a complete cyberpunk and post-apocalypse: I haven't seen such terrible mutants and insect people for a long time! After everything is ready, the squad sets off.
What to do is immediately unclear. But by sorting through all the elements of the interface, it turns out that moving around the global map is carried out with the help of inconspicuous arrows on the left, and apart from entering the big city, nothing more can be done right away. To move around the city in the usual discrete mode, you need to click on the compass rays from your eyes. And here you immediately need to stock up on paper and pencil, because even without a map it will be problematic to reach the first battle: the whole city consists of almost identical streets among dilapidated brownish houses, and it will be very difficult to find the right places that you need to visit in a strictly defined sequence. Communication with the characters is carried out using a special network interface. Through it, you can talk, ask, scan and analyze. All this, including keywords, is entered from the keyboard. There are also a number of icons - for example, the ability to use an item from the inventory, which also should not be forgotten (there are completely non-intuitive moments in Perihelion - for example, to show someone an item; no hints are made, guess for yourself - however , this is a common thing for games of that time). But the most interesting thing is that this network extends not only to communication with people, but also makes it possible to get into certain data stores (Network stations), in which - again from the keyboard - you can interact with files and directories. All such activities require special credits.
In addition to all this, the game also has a combat mode that is very similar to the Goldbox series: top view, we take turns walking, shooting, using psionic abilities (which are not there at first). To reach the first battle, you will have to fully explore the entire city and interview several characters, that is, battles are rare here - at least in the beginning - although they take a lot of time.
The graphics and music in the game are simply gorgeous. Thanks to them, you plunge into this strange and terrible world with your head, you want to go further and further. The palette is chosen so well that the graphics seem to be at least 256 colors, but no, the game is designed for computers with an ECS chipset. Because of disturbing sounds and gloomy ambients, you are constantly waiting for someone to attack, and since you can run around the city for a very long time and not meet anyone, when this finally happens, you almost jump.
Perihelion is one of the best Amiga RPGs; I especially want to recommend it to fans of cyberpunk, to which there are not as many games dedicated to it as we would like. Unfortunately, the adventures turned out to be rather short, and when you just start to get a taste, it all ends. The sequel never appeared, and no one else used all those ideas and the amazing game world.
‹
›
Home
View web version