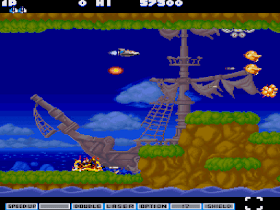 In the emulator settings menu, switch "P1 Joystick Select Mapping" to F1. OS menu for swap disk - R key.
Genre: Action
Perspective: Side view
Visual: 2D scrolling
Art: Anime / Manga
Gameplay: Arcade, Shooter
Narrative: Comedy
Published by: Konami Industry Co.
Developed by: Konami Industry Co.
Released: 1991
Platform: Sharp X68000
This is mostly the parody of Gradius (Nemesis on some systems), with some flavor from other shoot-em-ups, like Twinbee. The series is available on numerous platforms.
The game is a right-to-left scrolling shoot-em-up. You can choose from 4 different flying creatures, with different weapons. You must finish 7 stages, each having a boss at the end. You may start at either one, but must complete every level to advance to the final stage.
‹
›
Home
View web version