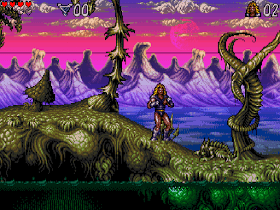 Genre: Action
Perspective: Side view
Visual: 2D scrolling
Gameplay: Platform
Setting: Fantasy
Published by: Thalion Software GmbH
Developed by: Thalion Software GmbH
Released: 1992
Platform: Amiga
Probably one of the most famous games on the Amiga, a 100% hit of its time and a hallmark of the native platform. Of course, exclusive and not released anywhere else.
At its core, it's an action platformer. The gameplay is simple at first glance. On the second - not so simple, but still not revolutionary different from hundreds of similar games. And at the same time, the game - within its platform, at least - is really a milestone and an object of a well-deserved cult. Plot - Valdin needs to return the mystical artifact of his race, the Lionheart, and at the same time find a cure for his cursed lover. Of course, we are not interested in the plot, but in the process, but... taking a closer look at the hero (and the Amiga graphics of those years allowed this!), we see that under our control this time... not a man!!! And indeed, Valdin is a representative of a special race of lion people, humanoid, of course, and even light-skinned, but still not people. The first surprise - and probably the most pleasant. But no, there will be more.
The hero can jump. That's not news. The hero runs full-fledged and at a time when he is not fighting, does not give the impression of a huge and clumsy hero, which, in theory, he should have seemed - this is already more interesting. The hero has a sword - a huge one that can kill enemies not only in front of him, but also, say, above his head - even more interesting. And the hero also knows how to strike with his foot and, for example, on his hands on a rope to cross the path over the abyss. But all this is trifles. There will come a time when Valdin will have to run on foot, but soon after the start of the game, a hero appears before our eyes ... riding a not very big, but extremely cute dinosaur! In what other game can you remember this? And in the future - and this is the main surprise - you will have another friend. More familiar in terms of gameplay, but - despite this familiarity - still even more wonderful. The Dragon. Here you can fly and fight on the dragon.
Will there be interesting enemies? Yes. And not the right word - it's just that Monsters with a capital letter, names that do not and cannot be. Will there be bosses? Yes, on almost every level. Huge and almost always interesting and complex - like the game itself. Are there many levels? As many as fourteen, and really big ones. Well, graphics - what can I say? You can, of course, limit yourself to one word "amizhnaya", but in relation to this game this term will be incorrect - it is precisely such graphics as here that we will later call "amizhnaya". More precisely, similar to her, because whether someone managed to repeat what you have the good fortune to observe here is a big question. Moreover, one can formally find fault with the fact that the backgrounds are not always truly diverse (although in reality there is enough variety), but even when this is the case, the drawing of every detail in the literal sense of the word is so captivating that any criticism immediately becomes akin to blasphemy.
So this is the Lionheart. Classic. Enough questions have been asked in the short text above, but their time has passed. Now a different time has come - the time to go to the mysterious fantasy world of Talion, so that in the game called Lionheart, controlling the hero Lionheart, to find an artifact with the same name. And then the magic circle will close, and the real magic will happen. Don't believe? Then try it and see for yourself.
‹
›
Home
View web version