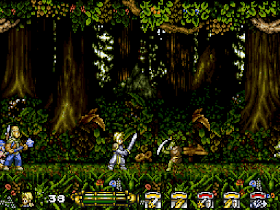 Before swap CD, save state to file, next CD, upload save state file.
Genre: Action, Role-playing (RPG)
Perspective: Side view
Art: Anime / Manga
Setting: Fantasy
Published by: NEC Home Electronics
Developed by: Nihon Application Co.
Released: 1997
Platform: NEC PC-FX
When the monsters attacked and captured Camelot Castle, the Emperor was forced to leave his post, and his son, Radius, fled, but deep down he did not lose hope for the return of his kingdom. With the help of his friends, the monk Nova and the fighter Mirion, he begins his campaign, and the goal will be to defeat the invaders and return the lands that rightfully belong to him.
Last Imperial Prince is a side-scrolling RPG. Radius and his group (AI controlled) fight enemies (appearing in specific locations) in real time using melee attacks and magic. Party members level up, learn new spells. You can equip weapons, armor and buy items in shops.
‹
›
Home
View web version