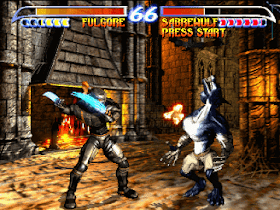 Genre: Action
Perspective: Side view
Visual: 2D scrolling
Gameplay: Fighting
Setting: Fantasy
Published by: Midway Manufacturing Company
Developed by: Rare Limited
Released: 1996
Platform: Arcade Machine
Continuation of a rather exciting fighting game about the fierce struggle of fighters from different parts of the universe for the title of the best. The main principle in the creation of this game was the saying: why do something new when the existing one turned out great. The number of fighters remained the same, but the "quality" has changed: the fire warrior Cinder, the lizard Riptor and the Indian Thunder were replaced, and the barbarian warrior Tusk, Kim Wu and the Amazon Maya arrived. As for the rest, the game has not gone very far from its predecessor, and the changes have only affected aesthetic aspects: the graphics have become clearer and more expressive, the music is more diverse, and even the changes have affected the final technique and the number of combinations of strikes that have become more convenient to use, in general, nothing deteriorated, and what can be expected from a game made after a short time in the same year, one can only say thanks for the additions. Summing up, we can say with confidence that it has become more fun to play, despite the theme.
‹
›
Home
View web version