The Dukes of Hazzard (PS1) 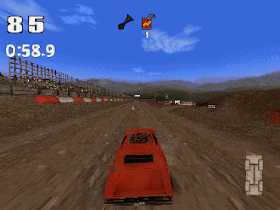 Genre: Racing / Driving
Perspective: Behind view
Gameplay: Arcade
Vehicular: Automobile, Track racing, Vehicle simulator
Published by: SouthPeak Interactive LLC
Developed by: Sinister Games
Released: 1999
Platform: PlayStation (PSX, PS1)
In this game, which is based on the TV-series of the same name, you have to get behind the wheel of an orange General Lee, trying not to catch the eye of the local sheriff. It seemed to me that in the first part the controls are softer than in the second, although otherwise the game is not much different and even surpasses it in some ways.
‹
›
Home
View web version