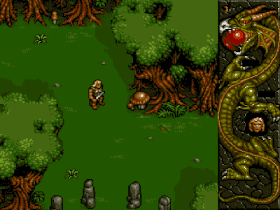 Genre: Action
Perspective: Top-down
Setting: Fantasy
Published by: Core Design Ltd.
Developed by: Core Design Ltd.
Released: 1994
Platform: Amiga
Another game with a capital letter since the late Amiga. Released only on the Amiga itself and on the Amiga CD32. Despite all her wonderfulness, there is not much to say about her.
View in isometry (but rather large), the action takes place in a fantasy world, we play as a barbarian who, fighting monsters, needs to defeat the villain named Agon. The game consists of seven vast levels, each of which shows the same landscape - the forest, but executed so well that it does not get bored in the least. The point of the game is to kill the monsters and see if they left behind anything; they can leave food (which the hero needs) or gold. Gold can be collected and, having found a witch's house in the wilderness, buy food or various useful items from the witch for this gold. Weapons include a sword and fireballs that the hero can release.
Perhaps the main advantage of Dragonstone is its really amazing graphics. The forest world with dense foliage, large mushrooms with red caps, rivers and circles of stones creates a unique atmosphere of Celtic magic, and you don’t want to leave this world at all. You want to live here... The disadvantages of the game include, perhaps, the inability to track the current state of your health in a convenient way. In a word, another great game worthy of the title of one of the best on its platform and mandatory for at least familiarization.
‹
›
Home
View web version