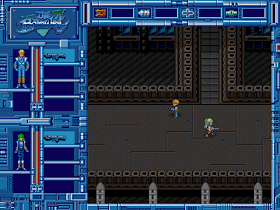 OS menu for swap disk - R key.
Genre: Action
Perspective: Top-down
Art: Anime / Manga
Gameplay: Shooter
Setting: Sci-fi / futuristic
Published by: Glodia
Developed by: Glodia
Released: 1992
Platform: Sharp X68000
The main characters of the game, Connor and Rania, are treasure hunters sent to a ship drifting in outer space, built by an ancient civilization that at one time reached the power of the gods, but could not bear the burden of responsibility for this power. According to rumors, this ship contains a powerful artifact Verbias, which gives the power to create and destroy entire planets, as well as the ability to travel to parallel dimensions. Of course, our heroes are not the only ones who are heading for this ship - a certain Professor Gary is following on their heels - and they will not do without traveling to a parallel dimension. Do not expect any unexpected plot twists, philosophy and halftones. But charming characters from all angles in numerous high-quality illustrations - you are welcome. In the early 90s, only Telenet played on a comparable scale with the Valis tetralogy, one of the parts of which also visited the Sharp X68000 and was awarded an amateur English translation there. But, perhaps, even there there were fewer illustrations - at least if we take into account the versions for floppy disks or cartridges, and not the PCE CD's. Therefore, it is doubly unfortunate that the game never received the fame it deserved - in the 92nd year, this could have caused a rustle, even if the illustrations had to be cut when porting to SEGA Genesis. And there is something to cut - the initial and final intro take up an entire floppy disk!
In terms of gameplay, Die Bahnwelt is closest to, scary to say, Chaos Engine for SEGA Genesis, SNES and Amiga. This is also a top down shooter with a partner controlled by artificial intelligence, but with numerous nuances and differences. Firstly, we don’t choose a hero - by default it’s Connor, and Remia covers our rear, although then the heroes will split up and we will have to run for the girl. Secondly, the partner in the DB is always immortal. Yes, he has a life bar, but when it is reduced to zero, he just starts flashing red and goes out of action for a short while until his life is regenerated to an acceptable level. Yes, here you can restore energy from the minimum mark to the maximum as many times as you like, if you leave the line of fire, and in addition, at some levels there are terminals with energy drinks. You can also save anywhere, but only if this place is relatively safe. For example, in the rooms with weapons and ammunition.
So about weapons. Each of the heroes has 4 slots for equipping weapons, which can be either infinite or finite ammo. If they are finite, the type of ammunition is indicated to the right of the weapon icon. There are only 4 types of ammunition (slots at the top of the screen). The game calls the first two - Type A and Type B, they are more common, and you can replenish them in special terminals. The third and fourth are rockets and grenades, and weapons that use them will still have to be reached. The maximum number of ammo in the inventory is actually more than it might seem from looking at the interface - one capsule usually means a clip, not a single bullet (the exception is grenades for a weapon that destroys all enemies on the screen). In principle, most of the game can be completed using weapons with infinite ammo, but the developers from Glodia themselves are pushing the player not to save ammo. After all, the more guns with non-infinite ammo are used, the more ammo of the currently used type falls out of enemies! All enemies, except for static guns and turrets, respawn, but it cannot be said that this somehow increases the difficulty. Moreover, the partners here are smarter than in the Chaos Engine, and there are more benefits from them, plus you can set the behavior pattern in the options. The company Connor in the second half of the game will be the android girl Eltene, and Rania - a small and sharp-tongued droid Oper - in terms of combat qualities they do not differ from each other, but they are sympathetic and add an eighth point to the column with their presence "plot".
Yes, the score for graphic design is just as high, primarily due to plot inserts. But this does not mean that the gameplay part of Die Bahnwelt looks bad. Still, the X68000, unlike NEC's computers, rested on action, and therefore things were clearly better with smooth scrolling. Moreover, the game, purely technically, bypassed most of the more eminent brothers on all home systems for 92. Competent level design, convincing bosses and, most importantly, the absence of brakes on screens with a large number of enemies and bullets.
With music, there is some snag in the game. The X68000 is famous for its quality FM synthesis OSTs, but for some strange reason, Die Bahnwelt only supports MIDI. That is, if you do not enable MIDI support in the options, then it will not exist in principle, and if you do, the sound quality will depend on your so-called sound fonts (MIDI SoundFonts). I don’t know how it is on the default Windows midi player, but on some Yamaha Softsynth S-YXG50 it sounds quite good. Although it's not a great Emerald Dragon OST, it would have been better in FM format. It seems that Glodia also understood this and there were no more “MIDI only” soundtracks in their games.
‹
›
Home
View web version