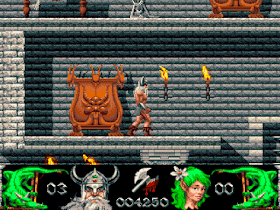 Genre: Action
Gameplay: Platform, Puzzle elements
Setting: Fantasy
Published by: 21st Century Entertainment Ltd.
Developed by: Hewson
Released: 1992
Platform: Amiga
A sequel to Stormlord that was released for the Amiga, Amstrad CPC, Atari ST, Commodore 64, ZX Spectrum and even Macintosh computers, but for some unknown reason the PC version of this game was never released. However, not only the graphics but also the gameplay of Deliverance is different across platforms. We can say that there are three "global" versions of the game: one for Amiga, Atari ST and Mac, the second, quite different, for Amstrad CPC and ZX Spectrum, the third, which is very similar to the second, but still different from it, - for C64. In this description, the first version is considered. The general meaning of the gameplay, one way or another, is identical in them, the differences relate to the external design, enemies and level structure.
You will play, as in the first part, for a mighty gray-bearded barbarian, whose task this time is to save the fairies from the clutches of the Black Queen (it is possible that there is some more serious detail, but it is hardly worth going into it very much). By genre, the game, like the first part, is a "combat" platformer with a side view, in which you have to jump a lot (jumping is almost the basis of the process, it's another matter that sometimes they help little) and fight a lot and in which there are two features of the gameplay: the first - almost every obstacle, even seemingly insignificant, will be very difficult to overcome; the second is the fairies that you need to save, at the moment your hero meets them, they will fall from top to bottom, into pits with fire, so you need to catch them before they fall into these pits.
The hero dies with one hit, but even at the start he has nine "lives"; however, due to the objective complexity of the game from the second half of the first level (and the levels are large here, and there are enough of them themselves), it becomes very quickly clear that there are not so many of these “lives”. Sometimes it becomes possible to get to a secret level, the goal of which is to collect as many coins as possible in order to get extra “lives”. Enemies are mainly represented by spiders, bats, all kinds of goblins, demons and other cute creatures, and at each level you will find your own surprises: for example, in the fiery world you will be confronted by fiery people, and in the forest - similarities of ents. In addition to enemies, there are also many dangers - like deadly clouds and stalactites. At the end of each level, a boss awaits you - always some huge and interesting monster in terms of appearance, which will not be very easy to deal with. At the fourth level, the biggest surprise awaits you, but it’s not worth talking about it - it’s better to see it with your own eyes.
The graphics in the Amiga version are perhaps the best of all, although, surprisingly, the screenshots in the Mac version show in some cases almost great detail. A notable feature is not only the already familiar clarity of drawing enemies and elements of the environment, but also the “largeness” of the image of all living beings on the screen. All in all, another great old game that's hard to put down.
‹
›
Home
View web version