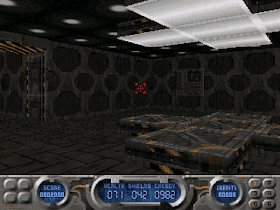 Genre: Action, FPS
Perspective: 1st-person
Gameplay: Shooter
Setting: Sci-fi / futuristic
Published by: Power Computing
Developed by: Fields Of Vision
Released: 1995
Platform: Amiga
The most important thing when playing Breathless is to keep a condescending or even sly smile. The latter may arise, however, not from the game, but from reading reviews of it in Amiga magazines. If this happens to you, get over yourself. There is nothing to laugh about here. And the work of others must be respected - whatever it may be.
As you know, the 3D-Action genre became one of the reasons for the victory of the IBM PC in the computer-game wars: it is believed that, with the exception of the first and third parts of Marathon, there were simply no “shooters” on other platforms. In fact, this, of course, is not true - on the same Amiga they are available, just, let's say, somewhat ... different. Breathless is just one of them. The game was released exclusively for the Amiga in 1995 - that is, when Wolfenstein 3D, both Doom and even Heretic with Hexen already existed on the PC.
The plot is quite typical: a gloomy future in which humanity is enslaved by evil aliens (more like cyborgs); naturally, there is the Resistance, one of whose fighters is captured by aliens and turned into a similar one, but not completely; and now he must get out of their fortress, killing as many of them as possible along the way.
The first thing that, most likely, will catch the eye of everyone who knows the genre at least a little, is the absence of weapons in the hands of the character. More precisely, the absence of any animation of the hands themselves and of what we shoot from. Just a first-person view (the movement, thankfully, is not discrete) and a scope. This is not very familiar and perhaps sad, but you can put up with it and adapt to it.
The rest - in fact - is not so bad: the hero has a certain amount of health, protective armor and energy, all this can be replenished with the help of selected bonuses. Energy in the game is a universal type of ammunition (but finite) for each of the types of weapons that can be found. Weapons do not lie around anywhere - you can buy new ones (and improve old ones) only in special terminals in exchange for special credit bonuses, which you also need to collect.
The game has twenty not too small, but, unfortunately, utterly monotonous levels, although a number of interesting places (like lava lakes) will still be found. However, such uniformity is due to the scenario of the game, and it would be quite possible to forgive it, but the fact that almost all of your opponents are the same type of white dummy with not the highest level of AI is already frustrating much more...
Following, apparently, the traditions of Doom, in the game a lot of attention is paid to doors - more precisely, the frequent impossibility of opening them just like that. Often, in order to open a door (and, accordingly, move on), it is necessary to find a lever that needs to be turned, or a key card for this door, which, of course, are not at all where the door is.
The graphics of Breathless look about the same as the first Doom - definitely not better (at least in the main details, but in some ways worse). Not “almost 3D”, but almost “2.5D”, the enemy sprites are flat and blurry, the ceilings are no less flat and low, some effects and details of the situation look better, but also do not amaze the imagination. And, of course, from a purely external point of view, any action on the PC is not only 1995, but, perhaps, 1994 looks much better in every way. However, as already mentioned at the beginning of the description, there is no need to laugh at the game. It's still an experience (by the way, not the first experience of creating a shooter on the Amiga) - perhaps not the most successful, but an experience. The Amiga just went its own way - the time will come, and its own Doom (Gloom), and even its own Quake (Genetic Species), which, unfortunately, no one will appreciate, will appear on it. But the developers still coped with their main task - playing Breathless is not so easy, you can die quickly enough. Therefore, at least from a historical point of view, and at least for great connoisseurs of the genre, the game is fully relevant to this day.
‹
›
Home
View web version