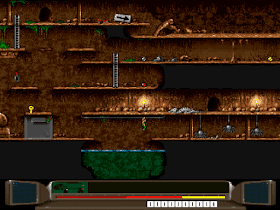 Genre: Action
Perspective: Side view
Visual: 2D scrolling
Gameplay: Arcade, Platform, Puzzle elements
Setting: Sci-fi / futuristic
Published by: Psygnosis Limited
Developed by: Digital Illusions CE AB
Released: 1994
Platform: Amiga
Benefactor is a small puzzle game with arcade elements. This means that the main character, Ben E. Factor, will have to run and think over 60 levels. The plot of the game is briefly but succinctly described in a "Star Wars"-style intro (3D letters flying from bottom to top). Once upon a time there were happy little Merry-men on their planet, and their main treasure was a machine for the production of rainbows, thanks to which a good mood did not leave them for a moment. But one day, villains arrived from a neighboring planet, who stole both the car and the merry fellows themselves. Fortunately, some of them managed to escape and send a distress signal into space. Our hero, the retired warrior Factor, responded to the signal. Now his task is to help the merry fellows.
There are several of these funny creatures on each level, but usually they are not so easy to get to: they are kept in cages for which you need to get the keys, and some of them got sick and turned gray from sadness, now only a machine that returns color can save them . The merry fellows are trying in every way to help Ben: they get the keys if they are thrown onto a platform that Ben himself cannot jump to, press the levers that are also inaccessible to him, repair the stairs and so on. But they are healthy - and the sick need an eye and an eye: they do not pay attention to anything so much that they can even fall into the water and drown (which means automatic Game Over). Ben himself must also be prepared for traps and hidden monsters, who strive to reduce the already small amount of health of the hero. But the management complicates the matter even more, which will have to get used to: after all, Ben's life depends on the right jump over the water. Luckily, the lives on each level are unlimited - that's what the puzzle is for!
Of course, you can't help but praise the graphics and soundtrack. The fact is that a small Swedish company Digital Illusions, which made Benefactor and is known to the visitors of our site for a series of pinballs, was founded by members of the group known on the demoscene - The Silents. Of course, the design of levels, carefully and flawlessly drawn sprites and animation of all game objects, as well as wonderful music from Olof Gustafsson are taken for granted by us, but all this is the fruit of long and painstaking work. So you and I have a unique opportunity to play a real "Amiga" game, while sighing - "Oh, they made games on the Amiga!"
‹
›
Home
View web version