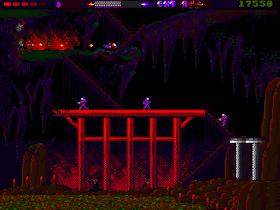 Genre: Action
Perspective: Side view
Visual: Fixed / flip-screen
Gameplay: Arcade, Platform
Setting: Sci-fi / futuristic
Published by: 17-Bit Software
Developed by: Skull Army
Released: 1995
Platform: Amiga
A good shareware action-platformer about aliens with the traditional word "Alien" in the title - however, this time the words "fish" and "finger" were unexpectedly added to it, giving the title a psychedelic flavor. In fact, the game is quite neutral: the main character, a mercenary named Frank, must perform tasks on a hostile planet, where he is confronted by humanoid aliens (read: men in spacesuits), occasionally there are more creepy creatures, but, I repeat, nothing that could be called insane or at least strange.
The game was made by one person, David Cruickshank, using Blitz Basic II, a homemade game development program, and distributed under the shareware scheme, that is, if you liked it, then you had to register it for money. Given this, it is worth recognizing that the game turned out to be very good. This is especially true for graphics. The levels, lovingly drawn in Deluxe Paint, although they have repetitive elements, attract with their individuality and beautifully recreated atmosphere of an alien planet with a strange civilization living on it. Each screen is rendered in high definition and evokes classics like Benefactor. True, unlike the adventures of Mr. Ben E. Factor, there are practically no logical elements here: we just run, jump, shoot at the little men running out from all sides. The animation is very pleasing: people (your hero and enemies behave almost the same) can bend down, lie down, fly away, bleeding, lose weapons, then pick them up, climb moving walls, chase you all over the screen and much more. The game is very dynamic: the hero and enemies move fast and jump very far (probably due to low gravity), often jump out from behind from a freshly cleared screen (but do not respawn). However, the difficulty cannot be called high: they often climb under the bullets themselves, and with a little training, you can already die only by accident or, for example, by falling from a great height. All sorts of bonuses fly out of the killed aliens, including replenishing health (reminiscent of a fireball).
The only thing missing from the game is the music. There are sounds in it, but instead of musical accompaniment, a disgusting squeak is periodically heard (perhaps this is an emulator problem). It's a pity, because it could have been even more atmospheric.
Summing up, I can say that, despite the little known, Alien Fish Finger is worth getting acquainted with, and especially worth paying attention to fans of adventure platformers with a sci-fi twist, such as OnEscapee, Exile and Benefactor.
‹
›
Home
View web version